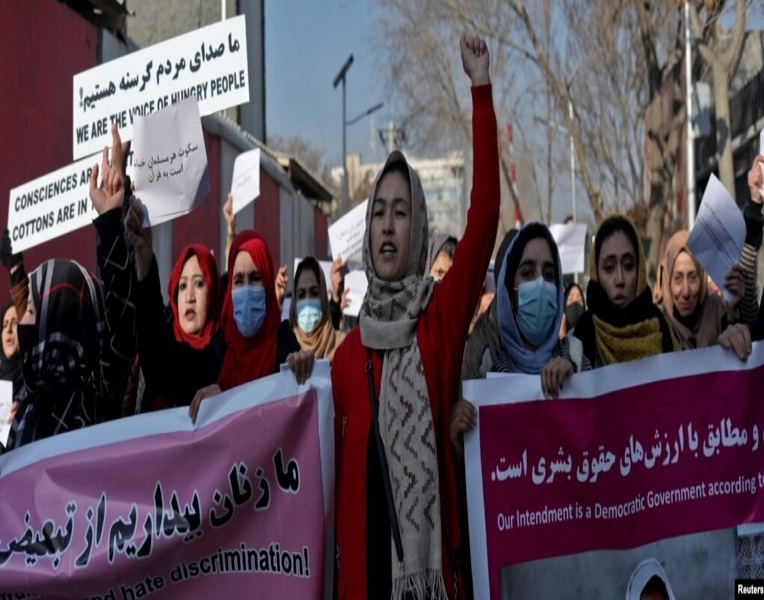 Afghan Women and the Taliban

A Year of Resistance

A year has passed since the fall of Afghanistan and its takeover by the Taliban. A year too has passed since Afghan women stepped up their efforts to combat the draconian policies of the Taliban. On this day, FEMENA commends the efforts of these women and urges the international community to listen to their demands for justice and rights.

On August 15, 2021, the people of Afghanistan found themselves stuck in an unbelievable and horrific nightmare. Their country had been handed over to a terrorist group that had for decades proven its enmity with the people of Afghanistan by murdering them in the most gruesome manner, on the streets, at voting polls, in schools and universities, in hospitals and maternity wards, in fact, wherever ordinary citizens were most vulnerable and defenseless.

On August 15, 2021, the people of Afghanistan had to face the reality that their killers were now their rulers. The foundation of this new political order, however, had been initiated long before this day, with the start of “peace” negotiations between the US and the Taliban, which excluded the Afghan government, Afghan civil society and the Afghan people and as such was largely viewed as lacking legitimacy.  Since the illegal takeover of the country by the Taliban, economic collapse, poverty, hunger and the dismantling of all political and social structures, has inflicted incredible harm on the people of Afghanistan.

Under these circumstances, the Taliban, who as de-facto rulers, are incapable of properly managing the country, have tried their utmost to erase women from society and the public sphere–an action that first began with the erasure of women’s images and photos in the public space and continued through the implementation of extremely limiting and discriminatory decrees. Over the last year, girls have been prevented from attending school and female government employees have been dismissed from their jobs. Mandatory hijab or forced veiling laws have been imposed and women who defy these regulations face harsh punishments.  The Taliban have imposed laws that require women to be accompanied by a male guardian while going out in public, making it almost entirely impossible for women to move around freely and to carry out ordinary and daily chores necessary for existence. To make matters worse, women are often arrested in the public space, simply for being women and charged with moral corruption. In fact, the Ministry of Women’s Affairs has been renamed as the Ministry of Vice and Virtue and charged with punishing women for overstepping the restrictive and regressive expectations and decrees implemented by the Taliban.

Since the start of “peace” negotiations between the US and Taliban and in clear violation of cease fire agreements, the Taliban stepped up their targeting of civilians with cowardice and murderous acts of terrorism. One of the groups especially targeted were civil society activists including women human rights defenders.  Since the fall of Afghanistan, repression and pressure on civil society activists, especially women human rights defenders, has continued unabated. Many women human rights defenders who despite all the challenges and shortcomings, had managed serious gains in women’s rights during the past 20 years, were forced to leave Afghanistan after the country fell to the Taliban.  Those who have remained face constant threats, arrests, detention, forced disappearances, imprisonment and torture.

In the midst of such hopeless circumstances, we have witnessed the emergence of a new group of women human rights defenders in Afghanistan. Many of these women have no or little experience in activism, however, many of them had in the past experienced the injustices of the Taliban rule (1996-2001) or have heard about the horrific violations of women’s rights by the Taliban during those days from their mothers. These activists have stepped up in a virtual vacuum inside the country, to object to the reign of terror imposed by the Taliban.

Despite the great dangers of publicly objecting to the policies of the Taliban, women’s street protests have continued. Several took place in the lead up to the anniversary of the fall of Afghanistan.  In otherwise bleak times, the persistence of women in this way, is a ray of hope and a testament that Afghans are unwilling to concede their rights to the Taliban.

* On the one-year anniversary of the fall of Afghanistan, FEMENA commends the public resistance and bravery of Afghan women, who despite great risk to themselves, have repeatedly taken to the streets to tell the world that their voices must be heard. The world too should refuse to concede on the rights of Afghans, especially the rights of Afghan women and girls, and hold Taliban accountable for rights violations.

* The international community, including the UN, Western and regional governments, should continue to refuse to recognize the Taliban as the official government of Afghanistan, continue travel bans on Taliban officials and pressure them to respect the rights of all Afghans, especially women, girls, LGBTQI community, and ethnic and religious minorities.

* FEMENA calls on the international community to ensure that the voices of emerging women human rights defenders and civil society groups in the country are heard. We urge the international community to support these civil society initiatives by adapting their approach to meet needs unique to groups operating in closed and extremely repressive environments. Like other groups operating in repressive environments, these new initiatives need training and support in order to remain resilient and to be able to operate safely.

* FEMENA also urges international and regional feminist groups, along with Afghan WHRDs now outside the country, to continue to elevate the voices and demands of Afghan women and girls inside the country. We must all work together to prevent the international community, western and regional governments from engaging with the Taliban in ways that would further undermine the rights of Afghans and especially the rights of women and girls in Afghanistan.